Known from the former Cocoon Club, today it is called Moon, in Frankfurt or the Amnesia in Ibiza.

A huge, ice-cold fog cloud refreshes the guests within seconds.
The fog flies as fast as it came.

Our cryofex IceExplosion is the first commercial unit in Germany and either as a fixed installation (cryofex ONE) or in the mobile version (cryofex MOBILE) available.

The “cryofex MOBILE” consists of a storage tank with liquid nitrogen, a cryo line, special valve and nozzle system.

In standard operation the output is about 30 meters, with a booster attachment even more powerful fog quantities (up to 1000 cubic meters per second) can be generated.

With the InstantFog attachment, even fog effects on cue are possible. However, most customers love the monstrous noise of the cooling phase particularly, so this fact does not matter.

Package for about 8-12 IceExplosion Bursts consisting of:
Tank unit 400 l, 10 m Cryohoses, nozzle head, only with staff!
Price on request 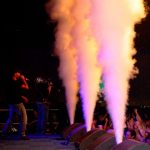