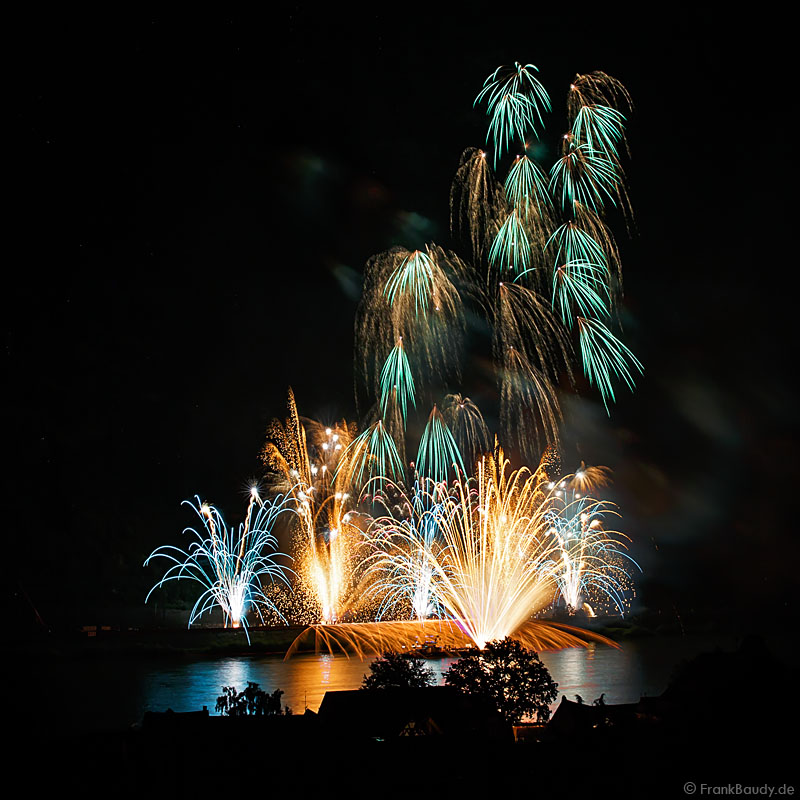 2014 – A rainy year for the fireworks industry, no construction without rain, but for the show – rain free … Saint Peter likes fireworks!

The entire team also had this realization this year – on the night of the 1000 fire – in Oberwesel.

4 days set-up, 20 people crew, 1.5 weeks of preparation in the bunker, felt millions of liters of water nearby, but it was worth it.

This year’s 25-minute show took place under the motto “Gravity”.

Without gravity, no firework works. Weightlessness in three-dimensional space, the dancing of the stars and powerful explosions of fireworks.

Gravitational energy is one of the great secrets of physics. With incredible effort, the research now has a carrier of this energy, the Higgs boson proved, perhaps this is the beginning of a new understanding of gravity, where the “apple” does not necessarily “fall far from the trunk”.

The show played in many places with this energy, floating stars, waterfalls, dancing comets and mysterious UFOs took the viewer on a journey through etheric images and fascination. The red thread of the production were baroque violin sounds, which meet in an ethereal ambience or an epic orchestral fundament, as well as elementary particles interact with their surroundings.

The show was opened with an intro from the film Gravity, which is cumulated in a spectacle of countless polypstars and thus creates a big bang. What happens when one thing slips away into the weightlessness was to be experienced in the next part, which was realized with the elegiac “Stay” of the Norwegian artist Merethe Soltvedt.

Very dynamic phases changed with this show with calm, meditative moments and in the overall picture a deep, emotionally captivating overall art work.