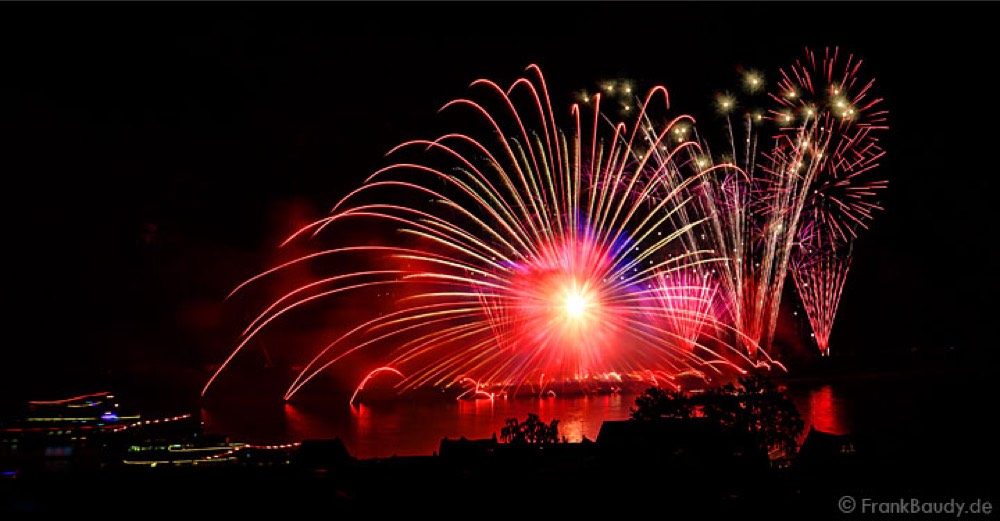 This year’s theme of the almost 20 minute show was called The Art Of Rock.

Rock’n’Roll as an art form?

The music scholars argue for years the fact that between 1968 and 1975 there was an enormous artistic output in the music and thus the notion of the art rock coined, another feature is a pre-eminently “The” with the band name, probably also around its own Importance.
The Pink Flyod, The Rolling Stones, The Led Zeppelin, The Genesis and The Queen have created the soundtrack for the show The Art Of Rock, all legends. In the minds of the musicians at that time, very imaginative pictures and texts often arose. This particular psychedelic element of the music is picked up by colorful colors and unusual effect combinations.

The journey began with “One Of These Days” by “The Pink Floyd”, a dark, gloomy song that was mainly supported by Bengal effects.
The classic “Sympathy For The Devil” from the “The Rolling Stones” from 1968 sparked the tension, into a cheerful, danceable color play.
“Who Lotta Love” by The Led Zeppelin was the basis for an energetic comet sequence with its distinctive guitar reef.
“Carpet Crawler” by Genesis, at that time still with Peter Gabriel at the microphone, conjured a imaginative world out of thousands of gold threads.
The Queen’s “Bohemian Rhapsody” was a totally new experience for the audience, as a completely synchronized realization. In the finale it was again a huge radial effect that produced a giant star with a diameter of 200 meters in front of the spectators.

The goose bumps were guaranteed!